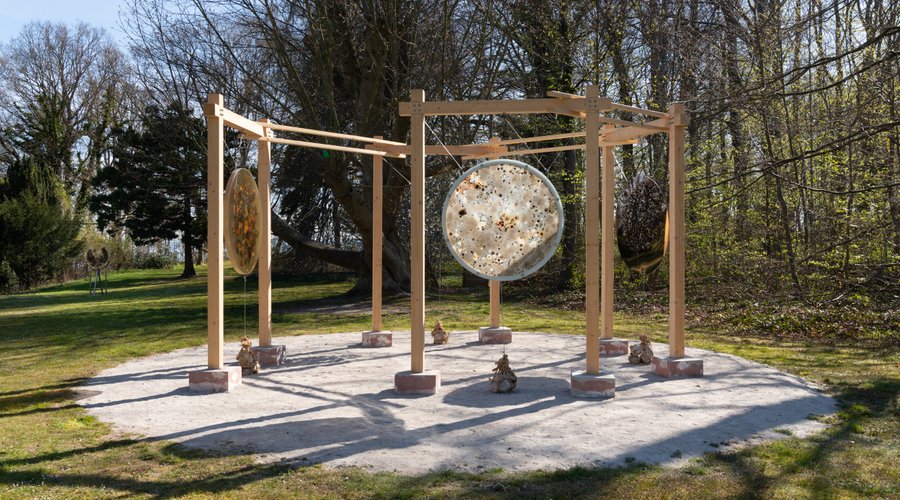 I consist of a multitude;

that have very fortunately decided to work together

on continuously co-creating the holobiont entity,

I think of as me.

into the fabric of cross-species

spanning from my own body

to the entire planet.

How to grasp this?

To observe, engage with,

along with and among my fellow beings

Comissioned by biotechnology company Novozymes, Relationscape stands as a sym-bio-poietic venture into the realm of biology understood as a co-creational mode of exploring, divulging and opening a dialogue with the fundamental other than human entities of our world. The piece consists of a spiral gate structure with four large discs that showcase and interrelate four different approaches or perspectives onto the delicacy of the cosmos, beyond the mere human capacity and frame; cultivation, archiving, mimicking and merging. Materializing as a cultivation of living fungi specimens in agar, an archive of nature from scandinavia embedded in cast epoxy resin, a 3D printed mimicking of human thigh bone structure, and a tinted mirror merging the immediate surroundings, each communicates its own take on materiality, theme and dialogue as a research element into experience based relations.

Photos by STH and Nicklas Nagel.

Who includes diversity and is Nature,

charity of the earth and the equilibrium also,

Who has not look’d forth from the windows of the eyes for nothing, or whose brain held audience

with messengers for nothing,

Who contains believers and disbelievers, who is the most majestic lover,

Who holds duly his or her triune proportion of realism, spiritualism, and of the aesthetic or

Who, having consider’d the body, finds all its organs and parts good,

Who, out of the theory of the earth and of his or her body understands by subtle analogies all

The theory of a city, a poem, and of the large politics of these States;

Who believes not only in our globe with its sun and moon, but in other globes with their suns and

Who, constructing the house of himself or herself, not for a day but for all time, sees races, eras,

The past, the future, dwelling there, like space, inseparable together.

[...] Evidently, communication [...] is necessary in all aspects of life. […] Even in relationships with inanimate objects and with nature in general, something very like communication is involved. Consider for example the work of an artist. Can it properly be said that the artist is expressing himself, i.e., literally “pushing outward” something that is already formed inside him? Such a description is not in fact generally accurate or adequate. Rather, what usually happens is that the first thing the artist does is only similar in certain ways to what he may have in mind. As in a conversation between two people, he sees the similarity and the difference, and from this perception something further emerges in his next action. Thus, something new is continually created that is  common to the artist and the material on which he is working. The scientist is engaged in a similar “dialogue” with nature (as well as his fellow human beings). Thus, when a scientist has an idea, this is tested by observation. When it is found (as generally happens) that what is observed is only similar to what he had in mind and not identical, then from a consideration of the similarities and the differences he gets a new idea which is in turn tested. And so it goes, with the continual emergence of something new that is common to the thought of the scientist and what is observed in nature. This extends onward into practical activities, which lead to the creation of new structures that are common to man and the overall environment in which he lives. It is clear that if we are to live in harmony with ourselves and with nature, we need to be able to communicate freely in a creative movement in which no one permanently holds to or otherwise defends his own ideas. Why then is it so difficult actually to bring about such communication?” – David Bohm, On Dialogue