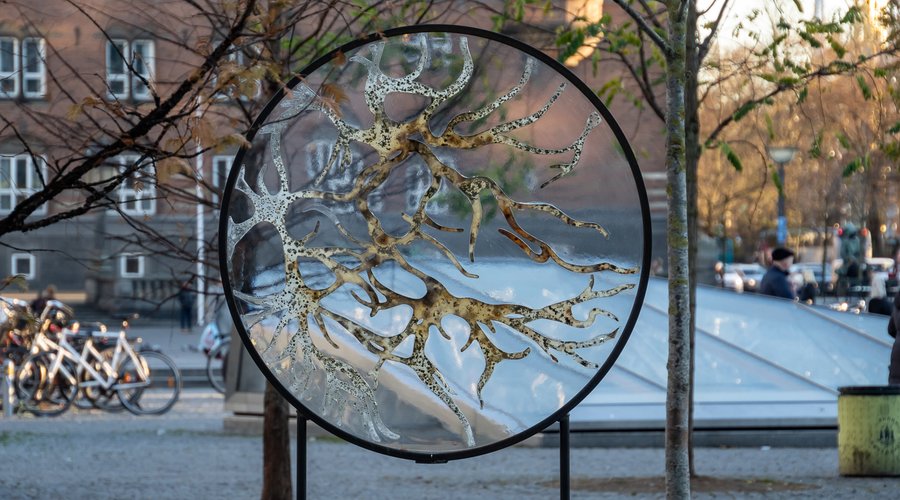 Fungi and bacteria are instrumental to the fact that life on earth has developed into what we know today: They have been vital for plants to evolve on land and algae to blossom in the sea, they are creating symbiosis between various different ecosystems and are having a myriad of vital functions around us and within us. We are more connected to them than we have previously known. The fungi we see in the forest floor are the mere spore-bearing fruit of a much larger network of fungal hyphae, which are found all year round underground. The hyphae spread in small tube-like structures which branch off and bind the forest floor together in large rhizomatic networks called mycelium.

The intricate structure of mycelium can be regarded as the neurological network of nature, as a form for biological internet relaying enormous amounts of data. The rhizome connection forms are perfect for communication, transportation and relationality serving the community rather than individuals.

The sculptures consist of three circles of polycarbonate that take the form of different rhizomatic structures: fungal hyphae underground, Astrocyte nerve cells in the brain and cosmic web tissue in outer space - the archetypal rhizome structure which is repeated on all scales of life from the smallest imaginable to the largest observable. Soil samples from the urban forest itself, containing fungi, yeast and bacteria that are allowed to grow inside the patterns, to give a microbiotic picture of the biodiversity in the urban forest. The three circles are fixed in resin and installed in iron stands.