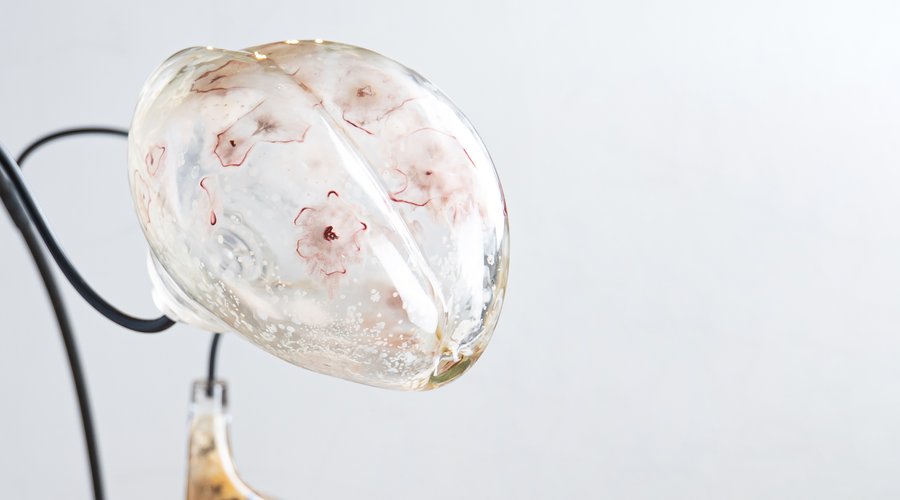 We find ourselves in times where power structures and hierarchies which place Humans above and separated from Nature no longer suffice, opening up to possibilities of re-negotiating our relationship to Nature.

Mycogenesis is a living installation co-created by fungi, yeasts and bacteria that highlights nature’s intelligence and the role of microbiomes in our co-evolution. Glass sculptures of different brains, seeds and organs are host to microbes from biotech laboratories and the local environment that grow as hyphae into rhizome mycelial networks as if they were nerve endings or synapses. The glass brains are hung in metal rods from the ceiling as some insects would hang their eggs.

The work questions what intelligence is and where it is located beyond the human perspective of reason, rationality and the mind towards sensuous, embodied, relational knowledge and asks us to reflect on the other species and microbiomes we share our bodies and existence with in holobiont relationships such as in the gut brain axis. Fungi are one of the most evolved, diverse, relational and adaptable species that we are yet to fully comprehend. They seek diversity for mating beyond binary genders and reproductive roles, they communicate via electrical impulses and chemical reactions as a decentralised entity beyond defined borders of an individual towards a collective body and they are integral for various symbiotic relations. Like some spiders in which their brain comprises 80% of their body or sea squirts that dispose of their brain once they have settled, Nature challenges our binary limitations of the notion and pursuit of continuous linear progress. Rather than a tree as a symbol for life and evolution with dead ends and a central passageway, could the future be inspired by the philosophy of fungal networks and intelligence? Can fungi guide us towards a new beginning of decentered, entangled, queer, relational co-evolved polyphonic futures with other than human species? Can fungi help to bring us out of Humanist ideologies into affirmative speculative futures of the unknown?