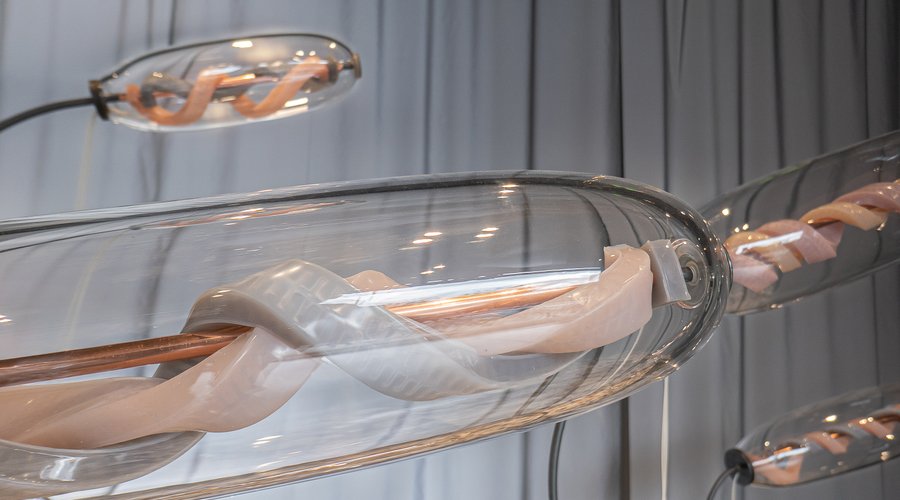 Scala Naturae consists of five glass pods on stalks that rise from a layer of diatomaceous earth. Inside the glass are soft robots breathing and moving in helix like forms from computer units connected to pumps and valves. Glas, silicone rubber, computer chips and diatomaceous earth all derive from the same element: Silicium, which is closely related to carbon, the foundation element for biological life as we are taught.

During the Cambrian explosion 650 million years ago, one of the planet’s largest ecological shifts occurred when diatoms, which are a form of algae, took over the world’s oceans and began to fill the troposphere with oxygen that was not there before. So much oxygen that the planet’s metabolism was set in motion, creating the possibility that life as we know it can exist, that fire can burn and that soil and metal can oxidize. What is toxic to one lifeform might be life giving to another. Therefore, what is the normative narrative of the past and the expected future? How does the pursuit of purity hold back ecological reforms?

The title Scala Naturae is latin for ‘The Ladder of Nature’ and points towards the aristotelian idea of hierarchy, the order of life and causality in the narrative of nature that we still reproduce today. However, does this heirachy still have relevance or do it’s limitations call for a new way of thinking life’s multi directional relatings, co-evolutions and diverse intelligences of equal importance? Blurring the lines between organic and synthetic agency, Scala Naturae is a sculpture that explores constant evolutions and relations in the in-between-zones of machines and organisms, technology and biology - all as an extension of life.